We tend to see eating disorders as all or none; you either have one or you don’t. The reality is that unhealthy relationships with food can be much more nuanced and subtle than a full-blown diagnosis of anorexia, bulimia or binge eating disorder. Eating disorders are very serious, even deadly, and should be addressed by a professional support team. However, many people exhibit signs of disordered eating yet never develop an eating disorder and may never realize that they have developed a damaging attitude towards food. Even though disordered eating may never prove life threatening and may not progress into a full blown eating disorder, it should still be addressed so that optimal health, both mental and physical, can be obtained. 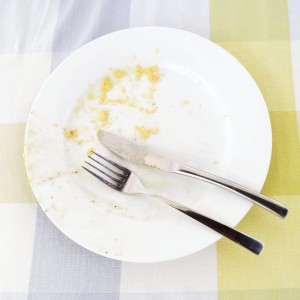 I had my own run in with disordered eating in high school. I was coming off of the common stage in teenage girls where I added body fat to my frame. I was self conscious of my new curves and wanted to keep them in check. I started exercising and became more conscious of what I was eating. Always a good student, I approached fitness with much the same determination and research as I did a school project. The accepted wisdom of the time was that a low fat diet was best.

In my 14 year old brain, I assumed that if low fat was good, no fat had to be even better. I restricted my fat intake to 10 grams or less a day. Healthy? Not even close. I ate tons of products (note, I didn’t say foods!) that were modified to be low fat. Of course, that fat was replaced with chemicals and sugar. Not so good. i remember eating salads made with fat free dressing and fat free cheese. Blech!

I wasn’t alone in this “diet.” A classmate of mine lived on Fruit Loops (fat free!) for over a year. I had discussions with another friend on how to mitigate the dry skin and hair loss that comes with an extremely low fat diet.

All along, I thought I was doing the “right” thing. Dean Ornish was on all the magazine covers touting the heart disease reversal that occurred with a low fat diet. All of the research seemed to point to fat as the ultimate diet demon. I just took it a little too far.

This was not an eating disorder. I never dropped any significant weight. I did not restrict calories. I rarely binged and never purged. Yet, I obviously had a disordered view of food, classifying it as “good” or “bad” and eliminating an entire macronutrient from my diet.

I started to shift when a friend of mine, who was starting to compete in bodybuilding contests, would eat peanuts as a snack at school. I was horrified. Did he not realize that those had 16 grams of fat per serving! But then I looked at him. He was lean. Leaner than me. He was strong, carrying muscle along his entire, previously skinny, frame. Maybe he was on to something.

I slowly started introducing fat back into my diet. It was scary at first. I pictured my arteries clogging like gutters in the fall. I figured that I would gain weight and maybe even have to increase a pants size.

Much to my surprise, the opposite occurred. My weight stayed about the same but I became leaner. I no longer woke up starving in the middle of the night and I was satisfied after eating in a way I hadn’t been before. It took a couple years, but I eventually made peace with fat and with food in general. It’s neither bad nor good. It’s just fuel.

Disordered eating tends to follow the current dietary trends. I don’t see too many people who restrict fat like I did since low fat is not in vogue. I do see quite a few people who demonize carbs like I did with fat, figuring if low carb is good, no carb must be even better.   There are people who eschew food completely in the name of “cleansing” and exist on nothing but juices and broths for days or weeks at a time. Others take vegetarianism to the extreme and consume only raw, vegan foods. Some people operate between extremes: all you can eat one week and diet shakes the next.

While none of these ways of eating are “wrong,” they all have a black and white view of food that does not allow much room for variety and complete nutrition. Going vegan is not a sign of disordered eating on its own, but going vegan as a way of cutting out foods that you fear will make you fat is another situation entirely. Disordered eating is as much about the motivation behind the diet as it is about the food on your plate.

It’s your body; you get to choose what you put in it. Are you making your choices based upon fear and restriction or health and balance? It’s never too late to develop a healthy relationship with food and bring some order to your plate.